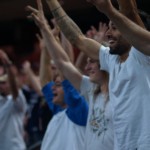 During a discussion at a recent Austin 501 Tech Club event a new friend reminded me that the challenges faced by small, producing arts organizations are in fact very similar to those faced by regional “for-profit” sports teams.

Connected with a Shakespeare theatre company in Texas Hill country, my friend’s litany of difficulties in creating both appealing and profitable pricing scenarios for all patrons, from first-time attendees to deeply engaged sponsors is a familiar story to nonprofit managers everywhere. Reconciling rising costs from vendors, such as ticketing systems, with the producing organization’s own need to increase margins to continue operations is a challenge universal to performing arts and sports events alike.

Small to mid-sized sports teams are more successful at marketing and reaching new audiences than their nonprofit counterparts because they treat the entire fan experience as a revenue opportunity, not just the sale of tickets. In fact, there are four key strategies performing arts organizations can learn from the way sports teams produce events and create exceptional experiences for fans while maximizing revenue.

Packaged to Sell
Sure you have single tickets and season tickets. Now get creative! Most ticketing services charge fees based on ticket price, so create packages that include more than just tickets. For example, the Austin Wranglers, an arena football team, included drinks, food, and table service with prime-front row seating. The setup required the sacrifice of an entire section of regular seats from the normal seating map, but the total revenue for the premium packages, which were often included as part of a sponsorship deal, exceeded the maximum revenue that could have generated from that section (if it sold out) by 10 times! In fact the revenue from the premium seating section was almost equal to the entire rest of the house!

Create smaller group packages. Groups don’t have to be ten or more. Include smaller group packages that net the same gross revenue to your organization by providing other “extras” such as coupons to be exchanged for food or drink at the concession stand, t-shirt, or collector’s program book, etc. For example, a family 4-pack including 4 sodas and 4 hot dogs might be priced similarly to a group of 10, and reaches a previously potentially under-served market segment. This kind of creative packaging has the added benefit of maximizing ticket revenue margin–since you sell fewer seats, you pay less ticket fees, and make up the revenue in additional services.

Reward early orders with special printed commemorative tickets. Even if your venue entrance system requires barcode scanning, most ticketing databases allow blocks of seats to be batch printed so you can create custom printed tickets which include barcodes. Companies such as National Ticket Co and Worldwide Ticket Craft are a good place to start getting quotes. If you don’t need barcodes, printing custom tickets is as easy as getting the seat numbers right. The effort you put into to designing and creating collectible tickets season after season, not only creates an urgency in your customer base to order early, but also also creates a deeper engagement with your best, long-term fans.

Something Special
Have a special promotion for every event. Rotate special deals, so it spreads the revenue “hit” across different operating budgets. The Round Rock Express use this technique for almost every home game. Examples of their promotions include: dollar hot dogs and sodas (concessions budget), get in free with a donation to local food bank (tickets budget), fireworks (game operations budget), special program (eg, kids club).

Creating special promotions is limited only by your imagination. Don’t let your ticketing or database system limit you. Think outside the box to create promotions that motivate ticket buyers. Listen to your sales staff, and be open to test new ideas. Don’t be afraid to fail. The promotions that fail never need be repeated, and ones that are successful can become traditions!

Include the Kids
Want to make sure the adults have a good time? Include children’s activities at every event to keep the kids distracted and out of mom and dad’s hair. For sports teams, this often means games or activities that happen during the game, off to the side. If your event allows it, consider creating a safe “kid’s zone” with low cost supplemental activities for families. Parents who want to attend the arts usually budget for childcare. Price the cost of your planned activities less than a night’s babysitter.

Don’t be dissuaded from this tactic if your organization produces art that isn’t necessarily considered “kid-friendly.” Get creative and find ways to include activities for the younger set. For example, most 11-year olds wouldn’t sit through Macbeth, but they would attend a fun Shakespeare “quick camp” while mom and dad see the show. Your organization can potentially supplement revenue and create life-long fans, all while providing a convenient service to parents!

Turn Fans into Cheerleaders
The Austin Wranglers had a very vocal set of fans, nicknamed the “Rowdy Wranglers.” These year-after-year season ticket holders made their presence known at every home and away game, traveling many miles, at their own cost, to support the team. The team recognized these raving fans by officially sanctioning the group, providing “uniforms” (in the form of custom printed official jerseys, which the fans paid for themselves) and allowing the group onto the field to perform pre-game. They literally paid to become cheerleaders for the team!

While pre-show public performances with pom-poms may not be appropriate for all producing organizations, arts groups can leverage their most loyal supporters by engaging them in peer-to-peer fundraising and advocacy campaigns, as well as volunteer opportunities. Have an engagement ladder that lays out the path from first-time ticket buyer to donor to board member. Always consider that butt in that seat gave his/her time and money to be at your event. What else might they be willing to do, if you ask them?

Nonprofit Doesn’t Mean “Doesn’t Make Money”
Being a nonprofit organization doesn’t mean you don’t make money; you just do something else with your profits. Instead of paying shareholders, you provide programs or serve the community. The same as all businesses, nonprofits must maximize revenue while minimizing costs. By following the example of successful events produced by local sports teams, regional producing arts organizations can garner that extra winning edge for themselves!